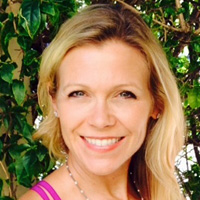 Anna began her yoga journey in 2003 with Kundalini Yoga. Always being interested in fitness, yoga was an exciting new world and Hatha Yoga, Ashtanga Yoga, and Bikram Yoga were also part of her practices. Studying with practitioners such as Bryan Kest and Mukunda Stiles began to shape her deep appreciation for various styles from Power Yoga to Structural Yoga Therapy. Anna fell in love with Kali Natha Yoga and earned her 200 hour teaching certification at Kashi School of Yoga in 2013 under a powerful and loving team of experienced teachers. Ma Jaya Sati Bhagavati, who founded Kashi Ashram, handed down this ancient yoga to her students. Anna is currently studying for her 500 hour advanced certification as well. Kali Natha Yoga speaks to the heart, and through deep pranayama and meditation practices, as well as structural physical poses and graceful asanas, you will learn to love your inner self and hear your own wisdom. Anna’s classes are deeply rooted in the breath, and are designed to help students express the present moment through fluid movement. Students can expect to be energized through the breath, and improve balance and flexibility. These classes are designed for all levels. 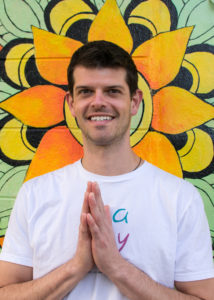 Chris is an RYT 500 and LMT who specializes in Thai Yoga Massage. He is also the owner of P.L.A.Y. (Peace, Love, Awareness, Yoga). His teaching style is unique in that he incorporates self-massage and self-care techniques into much of his sequencing. Chris loves to create new and playful sequences that flow with the guidance of the breath. Each class will offer a challenge as well as the opportunity for students to adopt modifications into their practice however they see fit. 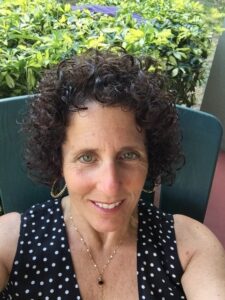 Debra Wiseman has been practicing yoga since 2012 when she attended her first Rock and Roll Yoga class with Mary Veal and she’s been hooked ever since! Yoga has provided Debra with calmness of thought and relief from chronic physical pain due to overuse injuries. Debra is a graduate of Green Tara Yoga’s first teacher training program in December 2019. She became a yoga instructor to further enhance her understanding of the history, practice, and philosophy of yoga. In addition to yoga, Debra loves off road cycling, stand up paddle boarding, kayaking and pugs. Debra is a medical technologist at Jupiter Medical Center Laboratory where she manages the blood bank. She has two grown children and one beautiful grandson. She lives in Jupiter with her husband Michael (who also takes yoga) and three crazy dogs. 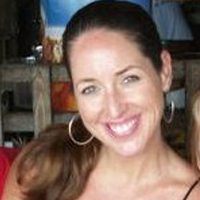 Holly has been a student of Yoga since 1999. At first she was VERY frustrated by how inflexible and weak she felt – it was incredibly humbling for her. Soon she started to feel stronger, healthier, centered, more balanced and peaceful. Her life began to change in wonderful and unexpected ways. Holly finally saw the beauty in patience, discipline and being still inside. Somewhere along the way she found her voice and began to use it. Then things became clearer for her on many levels. Now she realizes she was waking up. She began to listen to her intuition and later trust it. Even now, she believes that every day brings a new lesson. She was asked to teach in 2001 and absolutely loves it. Holly LOVES having anything to do with people getting into Yoga and having their lives changed as a result. She has completed many work shops and teacher trainings in conjunction with YogaWorks, Integrative Healing Strategies, Omega Institute for Holistic Studies and the Institute for Advancement of Human Behavior. Her training reaches Vinyasa, Sivananda, Vini, Bikram, Ashtanga and Pre-natal Yoga and various types of meditation and energy work. She is certified with the prestigious and international YogaWorks and is a YogaWorks Teacher Trainer Ambassador. She is also certified for Advanced Reiki. On the personal side, she grew up in Kansas and has two amazing children. Holly thinks a little sense of humor can go a LONG way. She trusts that the Universe guides us when we pay attention and stay present. Holly believes energy medicine is VERY powerful stuff. And she thinks people should use Yoga in their lives however it suits them 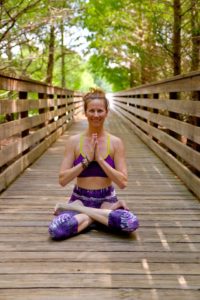 Joi’s love affair with Yoga began in 2011 and led her to receive a Yoga Alliance approved 200 hour teacher certification in December 2013 at Kula Yoga Shala in Jupiter, FL. Safety in practice has always been at the forefront of her teaching. She discovered Lara Heimann, PT and Yoga Instructor in 2019 and the next chapter of her love story began. She knew right away that LYT Method of Functional Movement and Yoga was a perfect fit. Lara’s method of re-mapping patterns of compensation and poor habits alleviated Joi’s back , SI Joint , neck and shoulder issues. She has never felt so strong, connected, and integrated in her body and knew she had to share this Method. Joi received her 200 hour LYT Method Certification in August 2019. She is a stand for everyone to move through life on and off the mat effectively and efficiently by creating safe, sustainable, and functional yoga classes. Joi also has an MS in Exercise Science and has been a licensed massage therapist for 20 years specializing in various orthopedic styles of bodywork. Joi brings passion and knowledge of movement and bodywork to every class providing a nurturing, safe, and educative experience that is sprinkled with love and laughter. 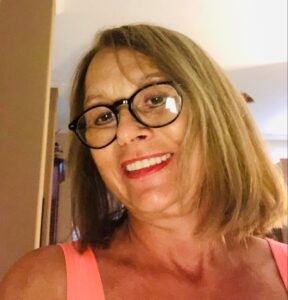 Judy’s yoga journey started after back surgery in her early 40’s in Lexington, Kentucky. Her yoga path was enhanced after practicing and attending the Yoga retreats at Kashi Ashram hosted by Mary Veal. Judy received her spiritual name from Kashi in January 2019 “Bhakti Jaya” and knew then her life was about to change; thank you Shakti, & Kashi. Judy loves the practice of yoga, moving in life with the theme of Mind, Body, & Spirit. Judy graduated in the first YTT 200 hr class at Green Tara Yoga in 2019. She also completed the Lakshmi Voelker Chair Yoga Teacher Training Program in September 2019. She loves chair yoga and helping others stay fit and healthy. 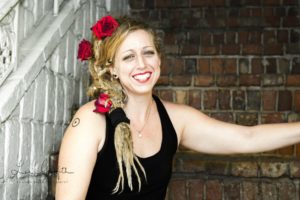 Hailing from sunny South Florida, Julie’s sadhana, or yoga practice, began in high school with a combination of pranayama, meditation and asana found in a well-placed teen magazine article. In 2009, Julie had completed Massage Therapy Certifications in Florida and New York. She relocated to Jupiter, FL and in 2013, completed a 200-hour Yoga Teacher Training program. Julie immediately dove into teaching Yoga on Water at Blueline Surf and Paddle, and maintains a weekly class with their outfit. Julie’s purpose is to bring the healing energy of water to friends, clients and the community. In most classes with Julie, you can expect a nurturing, sacred space with fluid, breath synced, calisthenic movement arriving at a deep, supportive savasana. 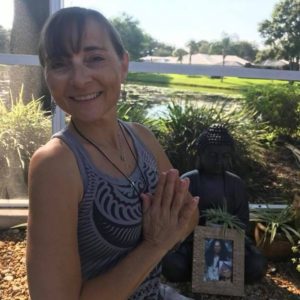 Kristin fell in love with yoga in 2002 and has been practicing ever since. In 2004, Kristin traveled to India, and while there she trained at the Krishnamacharya Center in Chennai, where she was given her personal daily practice. In 2008, Kristin decided she wanted to share the practice she loved so much, and she took her first RYT200 in Hatha Yoga, from Chicago School of Yoga. Through the years Kristin has been influenced by many styles such as Vinyasa Flow, Anusara – Alignment inspired, and Kundalini.

Originally yoga was a very physical practice for Kristin, that helped her quiet her mind enough to (even be still…) meditate. But as she loves to travel she went to India again in 2009 and deepened her understanding of the culture and history of India, as well as connecting with yoga teachers in each city.

After this Kristin began to develop a deeper understanding of the spirituality in yoga (bhakti) of yoga as devotion in motion – and how she felt more connected to herself. In 2013, while on retreat at Kashi Ashram, she experienced her first Kali Natha Yoga class and her heart flew open. In 2015 she took her second 200RYT training in Kali Natha Yoga, a kundalini tantric yoga, at Kashi Ashram, in Sebastian, Florida. She is currently in training for her 500RYT and assists in the training of new yoga teachers at Kashi Ashram in Sebastian, FL. 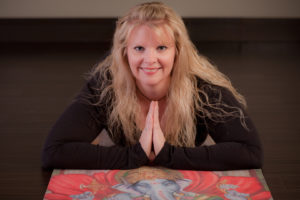 Mary is a nationally certified E-RYT 500 through Yoga Alliance. She obtained her 200 hour certification from Kula Yoga Shala. Her love of all paths of yoga is evident in her dedicated practice of more than 17 years. This love and respect comes through her teaching as she shares her knowledge and passion for asana, pranayama, meditation and philosophy. Mary is the only certified “Yoga for Arthritis” teacher in Florida. She is experienced in teaching many types of yoga, including Vinyasa, Chair, Yin and Yoga Nidra. Mary is the former Office Manager (O.M.) of Kula Yoga Shala.  Mary taught Rock and Roll Yoga and Heavy Metal Yoga on Motorhead’s Motorboat Cruise in 2014 and 2015.  She has had the honor of teaching and hosting trainings at Kashi Ashram in Sebastian, Florida and Satchidananda Ashram in Yogaville, Virginia.  Mary is currently completing her trainer certification with the Yoga for Arthritis organization and looks forward to training teachers across the country in this amazing program.  Mary loves traveling and hosts several international yoga retreats per year. 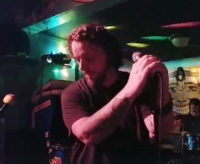 After experiencing the immense physical and emotional healing that yoga offered, Matt received his RYT-200 certification at Kula Yoga Shala in June of 2016. A lifelong learner, artist, and musician – Matt’s goal as a yoga teacher is to meet each and every student where they are, and to offer insight into the healing practice of yoga through a blend of philosophy, asana, pranayama, meditation, and mantra. 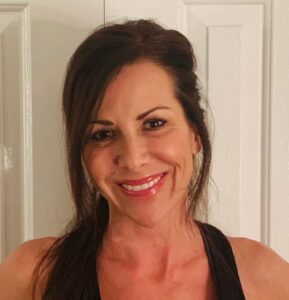 Maura has been passionate about fitness, health and wellness for the past 30 years. In 2017, she returned from the magical Isla Del Sol, Bolivia and began to walk a spiritual path. In 2019, she completed her 200 hour yoga teacher training at Green Tara Yoga. During this course, Maura embraced yoga not only in the studio but as a lifestyle. She is much more understanding, compassionate and balanced. As a teacher, Maura wants to help students awaken their inner strength through the physical asanas while sharing her love and knowledge of yoga. 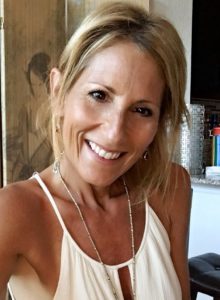 Meri became a certified Sivananda yoga instructor in 2005 and has been a yoga practitioner for 17 years. She has taught Sivananda yoga, hatha yoga, basic yoga, gentle yoga and children’s yoga in a variety of studios, has held Sivananda yoga workshops and served as a mentor in yoga teacher trainings. Meri is registered with Yoga Alliance as an E-RYT 200. Approaching all things yoga with humility, gratitude and enthusiasm, Meri has found her practice a refuge that has always been the key to bringing balance, clarity, and perspective to life’s challenges and triumphs. 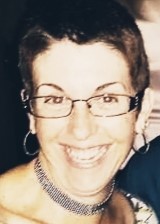 Monica’s love affair with all things yoga began with her very first breath in her very first class. With the encouragement of her teacher, she began to explore whatever piqued her interest: mantra, mudra, meditation, the chakras, philosophy, Reiki, aromatherapy, Ayurveda, qi gong, tai chi, reflexology…..the list goes on and on. As her practice deepened, Monica began to notice a new strength, balance, and flexibility in her life, not just physically, but mentally, emotionally, and spiritually as well. In 2011, she transformed her love of learning into a love of teaching and obtained her 200 hour certification from Transcend Yoga. Monica brings a beginner’s heart and a lighthearted reverence for all yoga traditions to her practice and teaching. And, just as she was encouraged by her first teacher, Monica encourages her students to seek their truest path to their truest Self with an open and joyous heart. 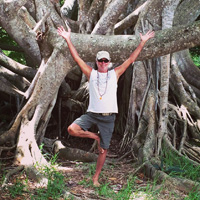 William (aka papacrock), began his path to yoga in 2012, after various body aches and pains, and an experience with cancer. Growing up in Florida, he was always active in fitness and surfing. His first real yoga classes at Kula were restorative, where he was able to tune in to his body, breath and spirit. He now teaches a gentle and mindful yoga practice, emphasizing breath, alignment, and posture, through multiple poses to help those, with aging gracefully. William says the practice of yoga has definitely enhanced and extended the quality of his life, and his passion is to share this gift with others.